There are roughly1 eight channels that enable innovations in the modern world. Each imposes a set of constraints on the projects they support. Why should we think about innovation channels? The channels’ constraints shape the sorts of innovations which can successfully impact the world. If a project doesn’t meet the constraints imposed by each channel, it will die. Projects often need to jump between channels to become full-blown innovations. Like salmon swimming upstream these leaps are full of danger and resistance. 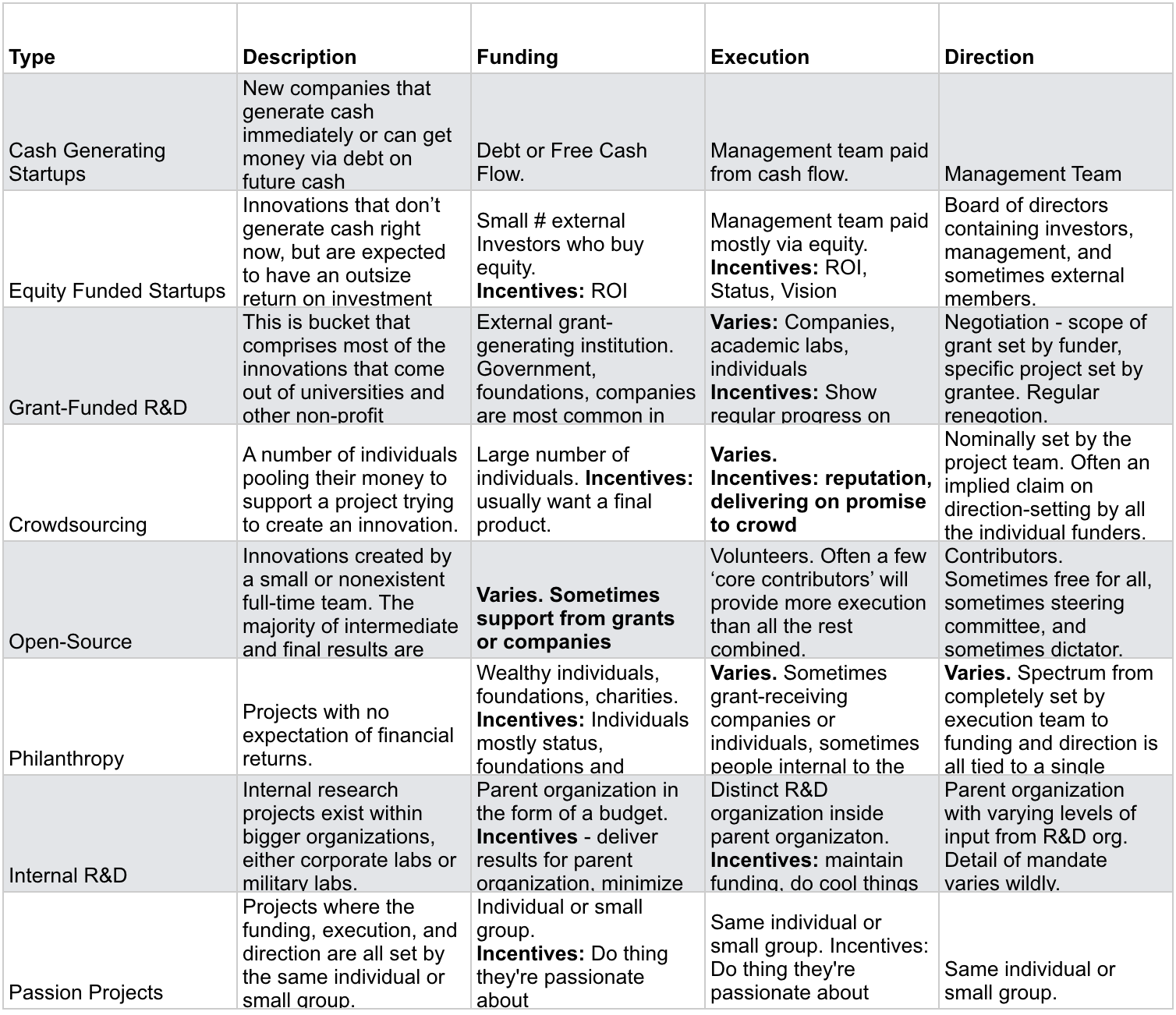 Some questions that should be asked when looking at the channels:

Some innovations are able to start generating cash almost immediately.
Funding is provided by debt on clear expected cash flows, or the cash itself. In a way, the number of responsible individuals are the number of customers. Execution is provided by a management team who are paid from the cash flow.
Direction is set by the management team entirely.
Examples: Modular Shipping Containers, GoFundMe, Vulcanized Rubber.

This is the channel that takes up significant mental space right now. Innovations that don’t generate cash right now, but are expected to have an outsize return on investment some time in the future.
Funding is provided by external investors who receive equity. Usually there are only a few responsible individuals.
Execution is provided by a management team who also have equity.
Direction is set by a board of directors that is usually (but not always) chaired by the management team and also includes investors. The investors have little say in small direction changes, but have indirect influence over large direction changes.
Examples: The obvious ones in Silicon Valley, Ford Motor Company.

This is channel that comprises most of the innovations that come out of universities and other non-profit research institutions. Grants are typically competitive awards.
Funding is provided by an external institution: the government, a company, or a foundation.
Execution is provided by the individual researcher or group.
Direction is most often set by a ‘negotiation’ between the grant provider and the researchers. Grant providers specify a scope (‘potential cancer cures’) and researchers propose a specific direction that falls inside that scope. Changing direction requires further negotiation. Examples: The Internet, Autonomous Vehicles, anything funded by DARPA, Almost all science theory after 1930, Some Art.

Crowdsourcing refers to a (often large compared to other methods of funding) number of individuals pooling their money to support a project trying to create an innovation. The project could be anything from a company making a product to a research project, to an open-source project.
Funding is provided by individuals who are for the most part not involved in execution.
Execution is provided by the people involved in the project. Who these people are varies based on the type of project.
Direction is nominally set by the project team. However, there is often an implied claim on direction-setting by all the individual funders.
Examples: Oculus, Ocean Cleanup.

Open-source projects are innovations that have a small or non existent full time team, most of the people working on it are unpaid volunteers, and the majority of intermediate and final results are available for anybody to use.
Funding is largely nonexistent. Some open source projects eventually receive grants or have contributors who are paid by companies to work on them full time.
Execution is provided by volunteers. Often there is an exponential distribution in contribution where a few ‘core contributors’ will provide more execution than all the rest combined.
Direction is set by different entities based on the structure of the project. Sometimes people just work on whatever they want, sometimes there is an official or unofficial steering committee, and sometimes there is just a dictator.
Examples: Linux, Git.

Philanthropic projects are defined by nonexistent expectation of financial returns.
Funding - The Philanthropy channel is largely about funding. Funding comes from wealthy individuals, foundations that originally were funded by wealthy individuals, or charities that aggregate money from many individuals. Execution - Varies.
Direction - Varies. Philanthropy can vary from giving someone money and saying “have at it” to projects like D.E. Shaw Research where funding, execution, and direction is all tied to a single individual.
Examples: OpenAI, Gates Foundation, DE Shaw Research, Liter of Light, Almost all science before 1930, some art.

Internal research projects exist within bigger organizations, either corporate labs or military labs.
Funding is provided by the parent organization, usually in the form of a budget. Two incentive driving considerations are who chooses the budget (and what do they care about) and how often the budget can change.
Execution is provided by the research lab, a distinct organization within the larger organization.
Direction is set by the parent organization, sometimes with input from the research org. The specificity of the direction varies wildly. The direction can be as vague as “help more people make more phone calls” to specific line items that need to be created.
Examples: Bell Labs, Xerox PARC, Edison Labs

Often ignored, many innovations start as individual passion projects. The line between passion projects and philanthropy is often fuzzy. In passion projects, the Funding,
Execution, and
Direction all come from the same person or small group of people.
Examples: Craigslist (start), Khan Academy (start), Most Art

I’m always looking to fill out notable examples on this spreadsheet.

Thanks to Josh Tobin and Luke Constable for amazing feedback.

1 The lines between the channels are fuzzy, as with most human things.↩