“Networking.” What a word. When I left grad school in 2015, networking was for slick-haired salesmen, former jocks, and social parasites in general. Real heroes built better mousetraps and the world beat a path to their doors. But then I looked at what real successes actually do - they lead a balancing act between connecting and building. Though Edison, Einstein, Musk (and anybody you may have heard of) have done real work, their projects would have been stillborn or failed if they didn’t know the right people: partners, employees, backers, supporters.

Always the slave to the scientific method, I proceeded with a “networking might be useful” as a hypothesis and did many experiments. Some were successful, some less so. In the process I developed a set of tactics that unleashed many opportunities - a stint as an EIR at Susa Ventures, speaking at conferences in Brazil and SXSW, and getting a company off the ground. (I like to think that) these were all built on a door of real value, but tactical network building provided the key.

Here are just a few of the specific tactics I’ve developed. At the end of the day, all of them boil down to one thing - make it easy for the other person - to remember you, to help, and to meet.

How do some people seem to wind up with advocates everywhere? They create a little mental model of themselves that makes it easy for everybody they meet.

Everybody has a “projection” - a small representation - of each person they know living in their heads. You know that friend who’s “the badass interface designer who is looking to get into machine learning and consults?” She has an amazing projection and makes it easy for opportunities to find her. A projection can be distinct - “Ben is looking for X, Y, Z and can help with A, B, C.” Or it can be fuzzy - “Ben’s that guy with curly hair I think who I met at that meetup and we talked about a bunch of interesting stuff.”

If it’s distinct, whenever X comes up in conversation, you will instantly come to mind, and you’ll start getting messages like “we were having a discussion about X and would love to bring you on as an advisor.”

In my experience, there’s a direct correlation between how well I create a distinct projection and people’s ability to help. When I was “the AR/VR guy who’s interested in giving talks” it led to a new friend introing me to an organization in Brazil that was doing a course on future tech, cascading to lecturing in Sao Paulo, making new friends, and opening up several collaborations.

The trick is that projections are small and can only hold a few pieces of information (rule of thumb - about three.) In order to maximize the effectiveness of your projections, figure out which things you want to be associated with in people’s heads and be excited about them. Nothing is more memorable than distinct excitement. Similarly, try to figure out the things that drive the whomever you’re talking to and incorporate them into your mental representation of that person. The best way to encourage people to keep you in mind is to keep them in mind. (NOTE: Many people take this to the extreme and straight up ask the question: “how can I help?” This is exactly the sentiment you should have, but it makes your counterpart feel like you weren’t actually listening )

How do you build a strong projection? A strong story. Stories stick in people’s heads better than anything else. Make sure you have a good one. All you need is a short narrative with at least one compelling character (you), a captivating theme, and some kind of narrative arc. Think about your life as a series of towns connected by a road, where the towns are the relevant parts of your background connected by your theme. Frankly, most people won’t remember the towns at all. They’ll just viscerally remember whether the theme was compellingly supported.

Telling a story doesn’t mean you should lie or exaggerate - people can tell. The piece that can be uncomfortable for us nerds is making meaning out of what are empirically disconnected events.

Make it Easy to Help

At the end of the day, everybody has so much going on in their own heads that it’s a miracle if you can exist there at all. How do you maximize the chance that you’ll get a precious slice of brain space? Use stories and have clear asks.

Reality check: people are going to remember at most three things about you. Make sure one of them is your ask- the most impactful thing they can do to help you. To maximize your ask, make it short, clear, and a single step. Otherwise, it will be harder to remember and execute. Making asks is often uncomfortable for smart successful people - you want to get by on your own and be so awesome that people will figure out how to help you on your own. This is not going to happen. On the other hand, if you have a clear actionable ask, people are eager to jump on it.

Years ago, whenever I would travel somewhere, I would passively post “I’m going to be in town, who wants to hang out?” Maybe one or two people would respond if I was lucky. Now I actively ask friends who have lived there “who are the best people you know there? Can you put me in touch with them?” The result? Friendships and adventures.

Some good examples of asks:

Why are they good?

Single Action to Execute - connect with people, or a link on the internet.

Detailed - they don’t force you to ask clarifying questions.

Timing on asks is subtle. In the limit, you obviously don’t want to walk up to a stranger and say “hey, I’m looking for a job.” Nor do you want to hold off on telling someone what you need until they’ve invited you to their wedding. Instead of thinking about time, think about interest. Once someone is interested in you, they’re likely to remember how they can help, regardless of how long they’ve known you. I’ve gotten to that point within a minute - when I mentioned I was doing research on elder care his eyes lit up and told me “Oh! I have a sister who’s worked in that field for twenty years.” (interest) “Great! Would she be interested in chatting?” (ask.)

Since relationships are built through 1-1 interactions, you can’t build meaningful relationships without 1-1 meetings. It took me a long time to realize that there are tons of things you can do to make a meeting great before it even starts.

Let’s assume you don’t have a personal assistant to schedule your meetings. Let’s also assume you don’t have enough leverage that you can get away with texting someone “I’m hanging out at Ritual Coffee for the next hour. Come find me.” Here are some tactical do’s and do not’s that make scheduling simple.

Do: Say what you want to talk about during the meeting in the email. It makes it easy for them to say yes and it gives you both a little reminder when you go back and check the email right before the meeting.

Don’t: Use the term “I’d like to pick your brain about …” It screams “I’m not willing to do the legwork to come up with specific questions and topics.”

Do: Give as much information as possible - “I’m based in the Mission and I’m in SOMA on Thursday afternoons.”

Don’t: Be vague or pretend to be busy when you’re not. One of my favorite lines to avoid vagueness is: “I’m flexible on time and place but like to offer a concrete suggestion…”

Do: Anchor the conversation with 2-3 options around both time and place. Windows of time are totally fine. *“Would you like to meet over coffee at Stable Cafe between 2-4pm on Thursday or Friday?” *

Don’t: Ask “when is best for you?” or say “we should grab coffee!” without an anchor time. It seems nice because you give them all the choice, but you’re also putting all the work on their desk and gives them no information about your preferences.

Calendar Invite - It might seem obvious, but many people still screw up the concluding act leading up to a meeting - a calendar event. Busy folks live by their calendars, so make it easy for them to remember the meeting - where/when it’s happening, who it’s with, and possibly what it’s about. Here’s a little sample from my calendar: 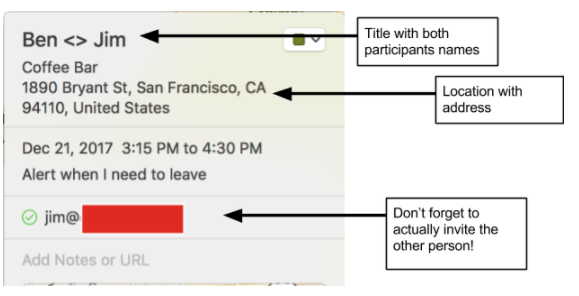 It could be even better if I had titled it “Ben<>Jim discuss AI Strategies” or put the subject in the notes section.

Do your homework before a meeting. Stalk your counterpart on the internet a bit. Read their Twitter/blog, skim their LinkedIn, Github, what have you. The whole goal is to understand a bit more about who they are, what they’ve done, and what excites them. It’s also just flattering when someone pulls out a relevant reference to your web page in a conversation.

At the end of the day, all of this boils down to ways to make it easy - for people to keep you in mind, to help you, and to engage with you. If you keep that heuristic in mind, it will be a snap to internalize these tactics and come up with ones of your own.

If you enjoyed this post, please share it with your friends and if you have any questions, please get in touch.