Testing on the ground removes all the characteristics of space that make eddy-currents and other exotic actuators useful there. Specifically, friction (with air or a surface) often overwhelms the small forces of spacecraft actuators that aren’t rocket powered. So, low friction test beds are necessary to experimentally verify things meant to move in space.

Several versions of low-friction test beds are available for spacecraft research, each with their own advantages and disadvantages. The two most common types are air-bearing test beds and rotational test beds. They have a number of advantages. However, unnecessary degrees of freedom, cost, complication and lack of extensibility motivated the construction of a 1-DOF air-track test bed.

Air-bearing test beds have simulated microgravity dynamics, both translational and rotational, for over 45 years. Traditional planar air bearing systems are ideal for testing 2-DOF dynamics, but have a number of drawbacks that make them unattractive for testing 1-DOF systems like early-stage eddy-current actuators. The second degree of freedom introduces extraneous variables when testing 1-DOF systems. Sensing the state of the 2-DOF system in real-time requires video processing software that is either custom built or expensive. Closed loop control requires on-board computing, adding to the complication of the system. Planar air bearings require extremely flat surfaces and rapidly consume compressed gas canisters. 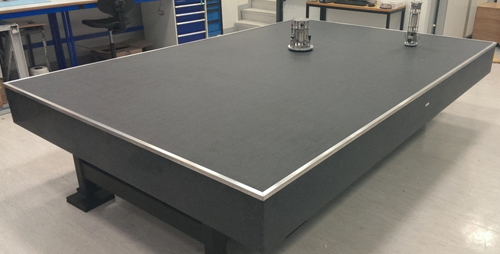 Rotational test-beds can also simulate 1-DOF microgravity dynamics. These test-beds consist of a target on the end of a long arm attached to a low-friction rotational axis. The throw over which they can approximate linear translation is limited by the length of the arm. The bearings holding the rotational axis experience more off-axis torque as the arm length increases so the friction will increase with the throw of the system.

A rotational test bed. Picture courtesy of the University of Michigan.[/caption]