(Or: the tale of why we can both go to Mars and save the world)

Imagine human capability as a high dimensional blob.1 There are some people who live on the surface of the blob (let’s call it the capability frontier ) - they have access to the best of the knowledge and resources humanity has to offer. Pushing this frontier and expanding maximum possible capabilities is Type I Progress. 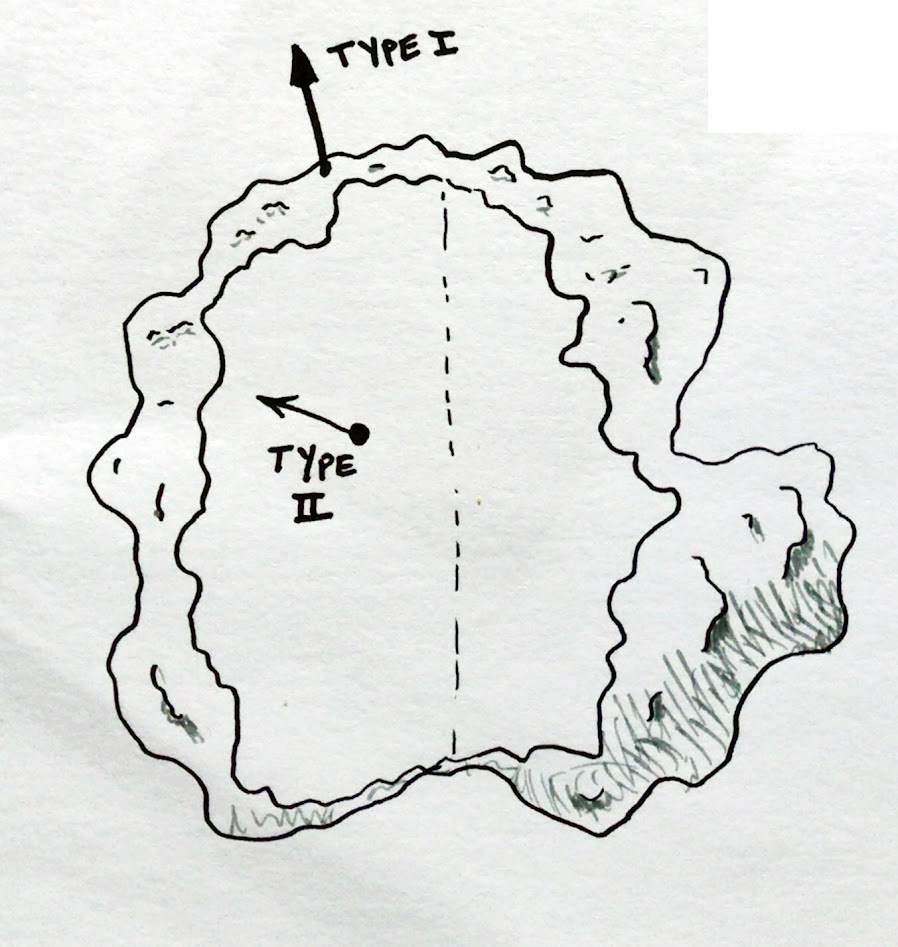 There are many people who don’t live on the surface of the capability blob - most people who live in ‘developing’ nations, for example. Actions that expand these people’s capabilities towards the frontier are Type II Progress.

Per William Gibson: “The future is here — it’s just not very evenly distributed.” You could think of Type I progress as expanding what the future is, and Type II progress as distributing that future.

There are even some people who might live a little beyond the surface in some dimensions. These are the innovators, the creators of new knowledge.

This chart of farm output over time is a great example of Type I and II progress: 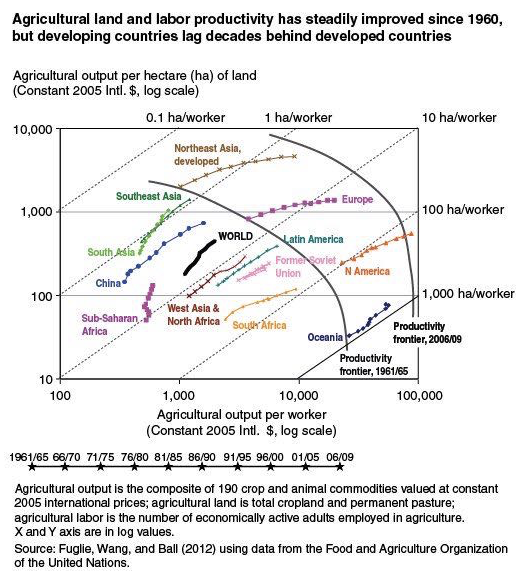 Here’s a simplified version of the above chart. 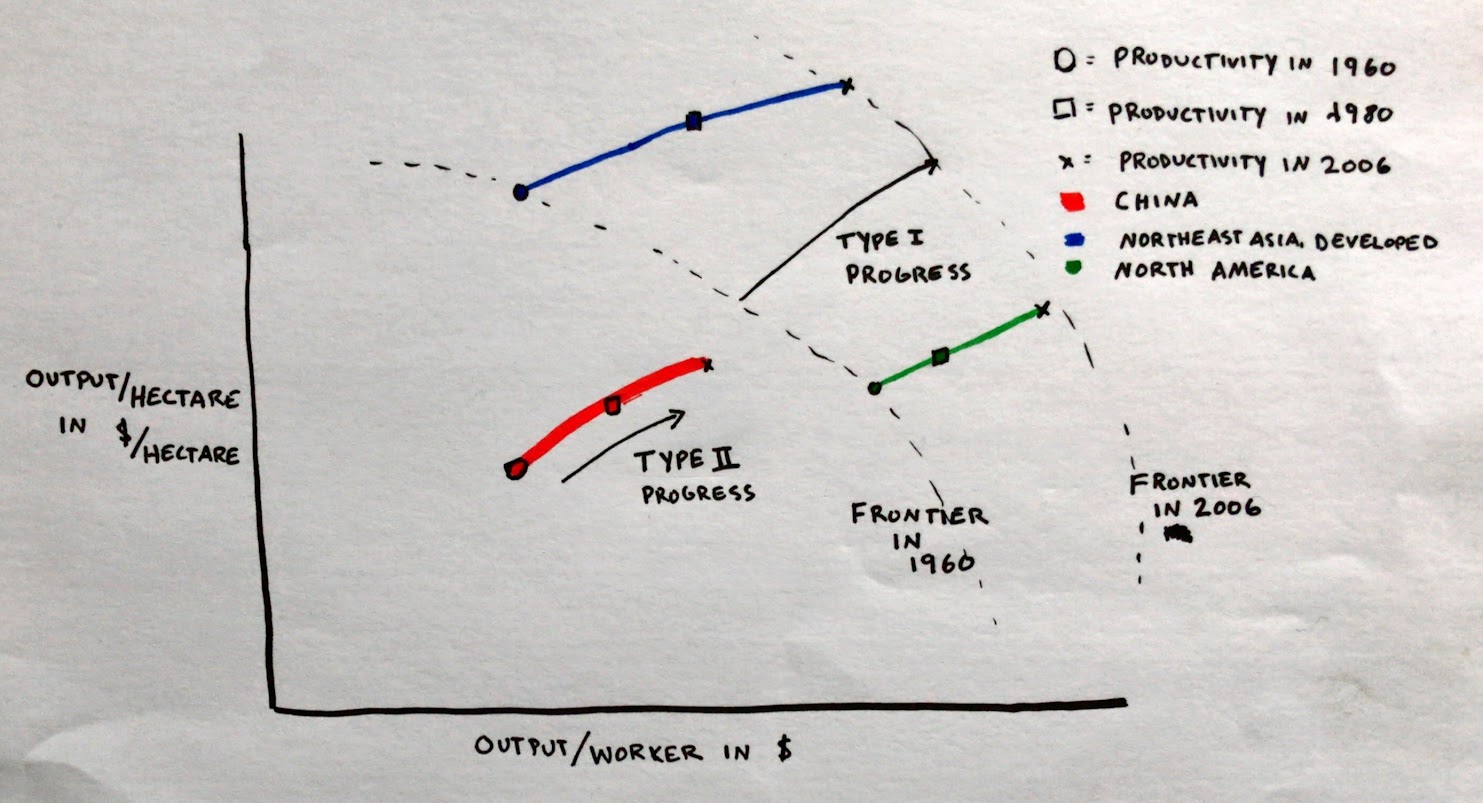 Mokyr puts it well in Lever of Riches:

“At any moment there is a large gap between average and best practice technology; reducing this gap by disseminating the techniques used by producers at the cutting edge of knowledge is technological progress without invention.”

Type II progress is this “progress without invention.”

In many recent progress-related discussions you often see people who lean towards one type of progress over another talking past each other, and I want to unblock that logjam.

This piece will break down why people confuse Type I and Type II progress (especially rapid Type II progress.) One big confusion-causer is the fact that progress frontiers are geographically fractal which has several implications.

Once we’ve disentangled the two flavors of progress, I will try to convince you that there are strong arguments for spending time and money on both so everybody can stop wasting time debating which is more worthy.

Type I and Type II progress are often confused.

People often confuse rapid Type II progress for Type I progress. This is in part because

Every time you zoom in on a fractal, it presents the same pattern on a different scale. This scale invariance makes it impossible to cleanly separate between places that would benefit from Type I vs Type II progress.

In the United States you would expect California to be right on the frontier - it’s the wealthiest state with progressive policies and hordes of people trying to build the future. Yet there are still hundreds of thousands of farm workers who live lives comparable to residents of developing nations - they clearly are not at the frontier and would benefit more from Type II progress than Type I progress.

Zoom in farther to the San Francisco Bay Area. In only a few square miles there are people pushing the limits of quantum technology living with infrastructure and policies that look like something out of a developing nation.2

You can’t even say that individuals are the quanta where you can draw a clean line between where Type I vs. Type II progress happens. Many researchers on the cutting edge of science follow discredited dietary guidelines from the 1970’s.

This inability to cleanly separate the two types of progress geographically adds evidence to the fact that “Should we focus on Type I or Type II progress?” is the wrong question.

Another consequence of this fractal nature of progress is that

Type I and Type II progress don’t correspond 1:1 with developed and developing nations.

Let’s look at the opposite statement “Type I and Type II progress correspond 1:1 to developed and developing nations.”

There are parts of China (Shanghai, Beijing) that are expanding human knowledge and capability - building new augmented reality technology, CRISPRing Babies, etc. But then there are also parts of China that don’t have indoor plumbing.

And as already mentioned, there are even parts of the United States that do not have indoor plumbing or consistent electricity, let alone ride-sharing, etc.

That isn’t to say that the knowledge frontier and developed nation status are uncorrelated. It is simply harder to spend time advancing the future when there are fewer people with all the knowledge and abilities that are at the frontier. At the end of the day Type I progress is easier to do in developed nations.

New technology requires previous infrastructure. Take the “Connecticut Yankee” scenario - if you dropped even the most experienced team of engineers in medieval Europe, they would be hard-pressed to create anything useful without modern tools, and supply chains. Additionally, “process knowledge” - the nitty-gritty subtleties of building things that are near-impossible to transmit via writing may be even more important than physical infrastructure.3

A stronger statement is that

Many people point to China and countries in Africa “technologically leapfrogging” the United States. The flagship evidence is Chinese mobile payments and cell phone propagation in Africa.

However, this evidence is not a sign that those places will soon eclipse the US technologically. Precision is essential when we’re talking about the technological frontier. These places can push the frontier on those dimensions - mobile payments and mobile phones as the computing center.

Disentangling Type I and Type II

There is a lot of explicit and (more insidiously) implicit discussion about which type of progress is more important. But “Should we focus on Type I or Type II progress?” is the wrong question. Debating the abstract relative merits of Type I and Type II progress is a waste of time .

Why “Should we focus on Type I or Type II progress?” is the wrong question

Because progress frontiers are geographically fractal you need to specify the scale and location you’re talking about. Then you will be able to say “at this scale and location what would be the result of a focus on Type I vs Type II progress?” 4 As already mentioned, Type I progress is easier to do in developed nations and its only possible to make progress along dimensions where you are already on the frontier.

Organizations can then decide what they should focus on based on their specific scale, location, and mandate. For example, a sub-saharan African nation should not be spending money on a national science program.

Individuals should decide whether to focus on the type of progress that fascinates them the most because debating the abstract relative merits of Type I and Type II progress is a waste of time.

There are good arguments for focusing on both types of progress. I would categorize the arguments into categories - eliminating bad things and enabling great things.

Arguments for focusing on Type I progress

The arguments for focusing on Type I progress are 20% eliminating bad things and 80% enabling great things.

However, even if you reject “more cool sci-fi stuff” as an intrinsic argument, Tyler Cowen argues in Stubborn Attachments that long term growth is a moral imperative. In the long run, Type II progress cannot exist without Type I progress. In fact, the rate of Type II progress may be proportional to the distance to the frontier (but this needs evidence.) In a few cases, Type I Progress can enable Type II progress. Normally though, attempts to use cutting edge knowledge to help people in Type II situations ends with broken energy-balls and PlayPumps because there is no infrastructure or knowledge to maintain them. So sadly those are exceptions to the rule, and “Type I progress can enable Type II progress” that is not actually a strong argument.

The arguments for focusing on Type II progress are 80% eliminating bad things and 20% enabling great things.

In the eliminating-bad-things category, Type II progress dominates. Type II progress is a clear way to relieve human suffering in the short term which makes a strong moral argument for Type II focus.

“Okay, but I have <$1B/ 24 hours in a day/ a government organization at my disposal> - should I focus on Type I or Type II progress?”

The unsatisfying answer is always going to be: it depends. Remember that because progress frontiers are geographically fractal the answer depends on time and geographic scale. What are you compelled by as an individual or have a mandate to worry about as an organization? Which contexts provide the most leverage to different types of progress may be a good question for Progress Studies.

If you buy these arguments, here are the actionable takeaways: