If asked "what container do you use to ship large volumes of wine?" the answer is  pretty clearly "the barrel, duh." But if you asked that question two thousand years ago, it would be "amphorae, duh. Barrels are expensive, tiny, shoddy containers made by barbarians."

(ASIDE) Amphorae were the dominant vessel for liquid transport in the mediterranean world for centuries. You probably think of amphorae as little urns that look something like this: 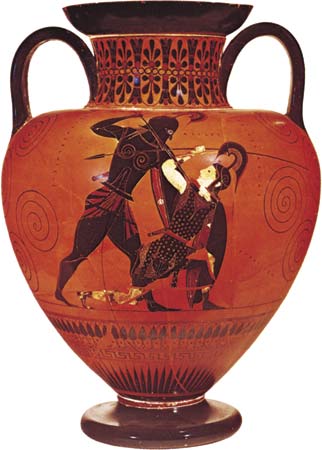 But that will be like someone a thousand years from now thinking of a custom Porsche when someone says "car": they're both high-end luxury goods. Instead of being painted with Greek men killing each other, most amphorae were several feet long and looked something like this:

Today, it's clear that barrels have many advantages over amphorae: they're lighter, less fragile, and don't need special racks to hold them during transport. So why were they ever chosen over barrels? Historical momentum and initial conditions.

Amphorae were developed in tandem with Mediterranean trade - amphorae enabled trade in valuable liquids and in turn, increased trade incentivized innovations in amphora technology. All of this occurred around the Southeastern Mediterranean (present-day Egypt, Greece, Lebanon etc.) Here, wood was relatively scarce and expensive. What was cheap and plentiful? Rich river mud. What's made out of mud? Amphorae. As trade expanded from this region into the rest of Europe, so too did the practice of using amphorae to transport liquids. Archeologists have found amphorae in Britain and Northern France, where wood is far more plentiful, so it would have been easy to use barrels instead.

So why didn't barrels begin to dominate trade as soon as heavily wooded regions connected to the trade routes? The same reason we're still using rockets to transport everything to space: Historical momentum. What did it take to shift the balance from amphorae to barrels? Something that hasn't happened yet to space technology: a massive shock.